(…)Since Italian tenor Emanuele D’Aguanno’s last appearance here as Cassio in Otello, the voice has grown larger and darker, with a more substantial middle range, yet the top remains secure and ringing. As a warm up, he began with Kleinzach’s aria from Hoffmann Act 1, ably supported by the men’s chorus. This was followed by the Carlo- Rodrigo duet (with several cuts) from Act 1 Don Carlo, well sung by the tenor and baritone James Westman, with exemplary Italianate style. In the second half, D’Aguanno brought the house down with Calaf’s Nessun dorma. This has become something of a failsafe hit in gala concerts. Here D’Aguanno was very impressive, singing with firm tone and an excellent top range.(…)

One of the most promising young tenors in his generation, he studied at the Pedrollo Conservatory in Vicenza, and he now studies with William Matteuzzi and Ramon Vargas. P.IVA 03189120243 Emanuele d'Aguanno - Via Monviso 38 - 22070 Capiago intimiano (CO) 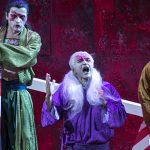