Back in 2008 I reviewed a recording of Wolf-Ferrari’s opera La vedova scaltra where Emanuele D’Aguanno sang one of the tenor roles. I commented on his excellent light lyric voice. Encountering him again in his debut recital in Capriccio’s “Première Portraits” series confirmed my opinion then. His is a light lyric tenor with some drops of honey but also a certain brightness that is attractive up high. The prevailing impression is of a smooth beautiful voice with delicate pianissimos and flexible nuances. He has a fine legato line and he is comfortable at forte but never presses the voice beyond its natural limits. Bellini’s cantilena suits him very well but he doesn’t seem to have sung much of him. Mozart, Rossini, Donizetti, on the other hand are frequently mentioned in his biography. The Bellini songs here are charmingly performed and the well-known Vaga luna gets a typically nuanced reading with well-judged rubatos. La ricordanza will also be well known to many, but not as a song in the first place. The melody comes from Elvira’s mad scene Qui la voce from I puritani. Which was first, the song or the aria, is probably not known. Torna, vezzosa Fillide is a long and unusually dramatic scene with shining top notes, rather than a traditional song. It also has an accompaniment that requires some virtuosity.
More of this kind we get in the Donizetti section, where there is a clear connection with his operas. È morta opens with a dark operatic recitative, followed by a more lyrical passage in 3/4 time, but the dark mood prevails. All these songs confirm D’Aguanno’s expressive dramatic capacity – most of all in Il pescatore, where he also turns out to be quite powerful, but still not overtaxing his beautiful voice.
After the dramatic Donizetti, Rossini’s songs come as a kind of relaxation. They are not without some dramatic impact either but they are more exhibition pieces of florid bel canto.
Throughout the disc Charles Spencer offers excellent support. Most of the repertoire is unhackneyed which should tempt curious listeners.
Less delightful, unfortunately, is the presentation. As with earlier issues in this series there are no texts and no notes on the music. The musicians’ biographies have value but the music was worthy of comment. While I am in grumbling mood I must also mention the track-list, which is set in teeny-weeny print in yellow against a red background. As for the typeface, it is almost impossible to tell an a from an o.
These quibbles apart this is a delightful disc. 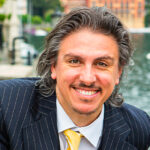 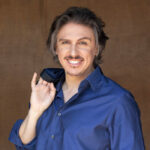